This morning (Wednesday) I awoke the name "Curtin" on my mind, but could not remember his first name. We last talked in 1979 when we worked together at the Eyring Research Institute on the proposal that was the precursor to the RPK Experiment. Our names plus one other were on the proposal we developed for the USAF at nearby Hill Air Force Base.

A Google of "Curtin Utah" produced "Roy Curtin", the very  man! I called and he answered, "Hello Gene, it's been a long time!"  Then he told me he had mentioned my name only days ago to local physicians, who had raised the subject of dreams, saying he knew someone who had something to say about that subject! As Arnold Mindell asks in his seminal Quantum Mind, "Who thought of whom first?" We can never know.

I updated Dr. Curtin on how the RPK Experiment came out of our ERI work; he updated me on what he'd been up to since then, which may have something to offer to our process. He then told me he had met Jack Houck and attended a spoon bending session years ago, not realizing that our ERI work together in 1979 was what inspired Jack to develop the PK Party in the first place!

After leaving ERI Roy went on to invent and develop The IQS™ technology, which can be found here. It will be interesting to see what happens next and why "Curtin" came into my awareness at this particular time.
Posted by Eugene at 7:30 PM No comments: Links to this post

[To be split off and added to Reflections on my Mormon Past from my Orthodox Present blog series.]

This post will make no sense to anyone but those who believe the Book of Mormon contains truth or has value. It is central to this personal Journey.

It will either confirm son Michael's belief that his father is deranged, or else it will offer a key to strange decision making processes of his father and that of many other Mormons. 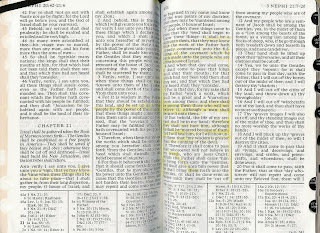 To those who read this seriously, Third Nephi 21 begins by mentioning a "sign" to precede something important happening in the unspecified future. Allow me to ask you to write what you believe this sign is and put it in the comments section to this blog. Many Mormons have varying ideas about this, not the least of which are those in the ecclesiastical hierarchy. Consider verses 8 through 10, especially the last sentence in verse 10. I want your personal, private views, even if they vary from the official institutional line.


Dear Eugene, I have a problem with the entire concept of "signs." On the one hand, anything can be read as a "sign." But what a sign "means" is about as definite as what a dream means: there are multiple legitimate perspectives and interpretations. Therefore, the idea that there is one right interpretation of anything, including any "sign," is problematic. I have often thought how different the historical contribution of the life of Jesus would be if Saul had not interpreted his "sign" on the road to Damascus the way that he did. What if he had known to interview it, either when he experienced it or later? What difference might that have made to his understanding of Jesus' life and therefore to the evolution of Christianity.


That is a helluva a comment Joseph, and right to the point. I agree with your perspective entirely and, if it weren't that I trust my life process to be what it is in whatever happens next, wonder what different decisions I would have made had I not trusted the ecclesiastics as I did to give me counsel. I have learned by experience, much of it turbulent and confusing, to go within and interview my experiences and dreams these days. This is largely thanks to your friendship, insights, challenges and suggestions ALL of which I reflect on carefully and gratefully.

Posted by Eugene at 8:33 PM 3 comments: Links to this post 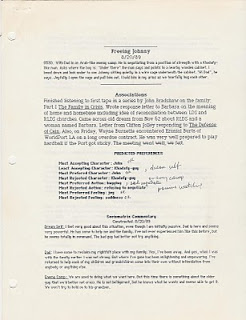 This morning, while looking for stuff to send Max Schupbach (Director of the Deep Democracy Institute in Portland) for his Kiev associates, I came across two old dreams from August 1989. They had been processed by Joseph Dillard's "Sociometry" methods (precursor to his Dream Yoga and Integral Deep Listening techniques). Once again I was astonished at how relevant and sychronistic these two items are today with regard to Michael's disaffection. Above and below are scans for the two dreams "Freeing Johnny" (8/20/89) and "Ivan's Question" (8/31/89) plus the Dream Sociometry processing of them both. 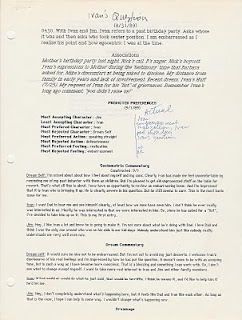 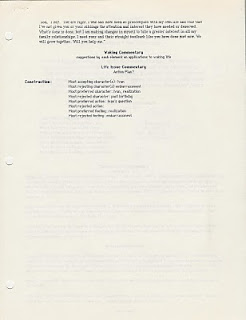 Posted by Eugene at 7:33 PM No comments: Links to this post

A small tow-headed boy about 4 or 5 stands inside  a white, bare-walled closet-like windowless room near the back wall. The only way in or out is through the doorway in which I am standing coaxing the boy to come to me. He is throwing a tantrum, jumping up and down and refuses. I continue to encourage him and have no intention of leaving without him. Eventually he calms down and his belligerent demeanor begins to soften. I hold out my arms. He begins to move toward me with a trace of a tentative smile.

Associations: son Michael. Head beautifully round as it was when he was born without birth trauma. Communication with him currently difficult. No reasoning with him. He is hostile and feels frustrated not being in control; feels cornered and/or exposed. Doesn't feel safe.

My dream self-aspect as the father has come into his own and wants to embrace the boy. The boy's tentative smile is promising.

Posted by Eugene at 9:23 PM No comments: Links to this post

This morning early (24 March) I awoke with a new insight in the process of reflecting on my Mormon past and Orthodox present, while reading Garry Wills' book What Paul Meant:

Mormonism is to The Prophet Joseph Smith as Orthodoxy (and all Christianity and Christendom) is to The Apostle Paul!

This allows me to better understand the objection of Jews to New Testament stories and how their tradition is the tap root of both the Orthodox Christian and Mormon traditions.

To be amplified later. It has to do with clergy, ecclesiastics and the proliferation of denominations...
Posted by Eugene at 2:09 AM 2 comments: Links to this post

Glad I got this before getting Michael's on March 24!

In our conversation today I related to you who you ‘occur’ to me as…in other words…who I experience you are BEING…for yourself, for Others, for the World.

One who listens for and reliably delivers that which makes a real difference in what people are dealing with and what they really care about,

And, in the process, leaves them transformed with more power, freedom, full self-expression, and peace of mind.

Around you, things that historically have never moved are now moving.

Some of the Promises I discussed that YOU occur to me as:

Being someone who leaves others empowered, enabled, and present to their own greatness

Being unconstrained in sharing yourself and what matters to you

Being powerful and unstoppable in the face of no agreement

A Future of Extraordinary Accomplishment

I am honored, proud and excited that YOU are in my Life…

Posted by Eugene at 9:47 PM No comments: Links to this post

How strange!. As I hit the download button for that day's email, I saw--only for a split second--something from Michael!! I'm almost positive I saw it! There was a quick message in what I saw having to do with "letting go"....  That's all I got.

So, Michael, if you read this and that was you, know that I saw it and hope to see more of the real you. If, on the other hand, you wish to stay hidden and have me let you go, then fly away, my son. It's your choice.

Just know this one thing: if you attack, you will be met by a loving father with open arms. Your dad doesn't roll over or run away.

Love, Dad
Posted by Eugene at 10:53 AM No comments: Links to this post

Fond memories.
Posted by Eugene at 1:17 PM No comments: Links to this post

When we were all together 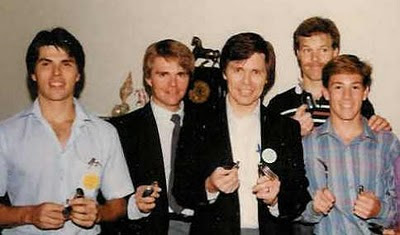 Photo taken at Jack Houk's PK Party #84 in early 1980s in Southern California. From L to R: James, Ivan, yours truly, Nick and Michael. We are all holding flatware wreckage from having exposed them to the fun of "mind over matter" by commanding those pieces to warp. [Note: For an excellent description of this psychokinesis phenomenon, see Michael Crichton's "Spoon Bending" chapter in his book Travels]

For the full history of the invention of the PK Party click here.
Posted by Eugene at 11:06 AM No comments: Links to this post

I began this blog series with a poem written in response to son Michael's poem called The Mirror written on Monday, March 16, by my estranged son as it appeared on his then web site michealk.us. Thinking it was written for or to me, I replied with a poem of my own, written on Friday, March 19, 2010.

I would write to him directly, but Michael is determined to block all avenues to him from his father at this (19 Mar 10) writing. ("You are no longer welcome in my life!", he had written two years ago, when his dad failed to accept his terms for "restructuring" their relationship.)


Absalom in the Mirror

Why do you seek your father's throne?
If you believe there is none?

Can you not see your sorrow
Is not of him
But from yourself?

Can you not understand
That what you see in him
Belongs in fact to you?

Can you not reveal your beauty
Without trying to take his?
To do so is not possible and will only make you ill.
Find your own kingdom, my son,
And do not fear to find it.

Patricide is no solution.
Only Beloving is.


“To be a king you must experience what kings experience. Seek your own kingdom and search your own soul. Do not fear to find it, though you will be tested and challenged. Take your courage in your hands and remember the tiny spark of gladness. You will know when you need to know and will be equipped as needed. Then will you find your rightful place and the kingdom of your heart.”