My only brother Virgil is gone

Deseret News Virgil Kovalenko photo Virgil Nicholas Kovalenko1934 - 2021Virgil Nicholas Kovalenko (AKA: Virgil N. Kregg), Major, USAF (Ret.), born 20 Nov 1934, 2nd son of Nicholas and Ruth Kovalenko, received his final PCS transfer on 8 Jan 2021. Reared in Phoenix, AZ, until called to Navy active duty in April 1954 while attending Phoenix College. Trained as a Navy photojournalist, he served on the staff of ComPhibPac. Released from the Navy in April 1956, he served an LDS Spanish-American Mission until Nov 1958. He married Lela Joyce Musick of Santa Ana, Calif. in Dec 1958; they were sealed in the Los Angeles LDS Temple 3 weeks later. They reared five children: Nicholas (Arlene), Michael (Brenda), Lisa (deceased) (Dennis), David (deceased) and Kanya who provided, among them, 18 grandchildren and 12 great-grandchildren.After his mission, he attended Orange Coast College (AA degree); University of California/Riverside; Brigham Young University (BA); Universidad Interamericana, Puerto Rico (M.A.Ed.); and University of Utah (Ph.D.). He did additional doctoral work at three universities in Spain. Commissioned in the United States Air Force, he served in many assignments throughout the United States, in Puerto Rico, Viet Nam, Panamá and Yemen Arab Republic as well as the Chairman of Spanish on the USAF Academy faculty. He retired in March 1983. He received numerous military awards and decorations, including The Bronze Star and Defense Meritorious Service Medal. He was active in sports, drama, Scouting, Church and humanitarian service throughout his life. He received many trophies and awards for his participation in those activities. He founded and presided over VASAA, an international veterans' service organization, for 20 years. He was instrumental in organizing humanitarian projects that served in Viet Nam, Mexico and Ukraine. As a photojournalist, he was an editor of military and college newspapers and publisher of several newsletters as well as assisted in the writing of several books about LDS Military Missionaries.Services will be held at 11:00 am on Tuesday, 12 January 2021 at the City View Mortuary, 1001 E. 11th Ave, SLC, UT. Internment will immediately follow at City View Memoriam, adjacent to the mortuary. In lieu of flowers, contributions to the LDS Church Humanitarian Fund are recommended. -
Posted by Eugene at 9:35 AM 1 comment:


He would have been 59 today, his favorite day of all days 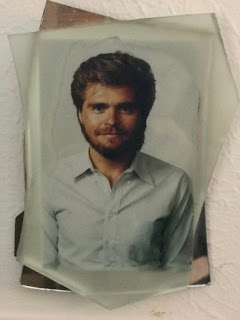 Ivan
in a glass frame made by his next older brother Jim.
He is in early to mid 20's here on my wall

I remember Ivan's telephone call on this day in 1993 from Southern California to my rented room in Santa Fe. He'd had a distressing dream that morning that he wanted me to do a CREEI Process analysis with him that he would record. We did that and I still have his recording.

However, had I known then what I know now about how to process and discuss his dream more deeply, perhaps he would still be with us today. When he left this world on the Autumnal Equinox in 1996, I felt that I'd failed him, which feeling still haunts me to this day.

Be blessed, dear son. I will always love and cherish my memory of you. I know you are out there somewhere. You have made yourself known to many of us since, through our own dreams and conversations. Your daughter Devon, now in her early 30s has felt your presence since she was 12, even though she did not know your name until she was 23, which is when she contacted me and our family. I have always felt grateful to her adoptive mother for writing me a letter years later about your being there at Devon's birth and how lovingly and tenderly you held her in your arms touching her tiny fingers and toes, even though you declined her adoptive mother's invitation to be a part of their family and your baby's upbringing. Your brother Jim has reconciled with you also, as you have appeared to him more than once in a helpful way.

I suppose all the rest of your brothers are toasting you together via the internet wherever they are this day, as has been their yearly ritual ever since you left.
Posted by Eugene at 10:12 AM 1 comment:

I believe John Dehlin is an honorable, intelligent and dedicated man, whose motives are of the highest quality and integrity. I’ve followed his development for over 20 years and know him to care deeply for his family, his Mormon cultural heritage and his many friends both in and beyond his cultural upbringing. I am proud to feel considered his friend.

So proud of Mit Romney today, 5 Feb 20! A day for history

Posted by Eugene at 9:15 AM No comments:

A few days ago my old friend Rex Mitchell (since 1958 UC Berkeley days) sent me the flier and program notes to a concert he and I performed in in March 1965 in Laguna Beach, California. He had been cleaning out his old files and sent them here, rather than tossing them. Thanks, Rex.


This concert was produced and advertised by then Bishop Robert Perine of the Laguna Beach Ward of the LDS Church. Bob was one of my best friends and had been Sue Patchell's and my patron in our studying voice with famed Russian diva Nina Koshetz (of Hollywood and protege of Rachmaninoff). A well-known professional commercial artist, he did all the art work pro bono.

I'll not soon forget this event. It was soon to be eclipsed by a life-changing series of events beginning the following April 23. [See: http://orthodoxodyssey.blogspot.com/2007/03/truth-by-reason-and-by-revelation.html]
Posted by Eugene at 4:06 PM 1 comment:

Further reflections on Ukraine in 2020

Liahonagrad is the poem I wrote about my first trip to Kiev in 1988, while attending the Millennial Celebration of the conversion of the Russian Empire to Christianity in Kiev in 988.

With Ukraine's central role in the current impeachment trial of  U.S. president Donald J. Trump and Russia's having in 2014 taken illegal bites out of this vulnerable, centrally located country, it is becoming more and more apparent what a delicate, but critical role Ukraine has been thrust into in international geopolitical terms. If Ukraine’s new, young president Zelensky has the personal character, courage and wit to stay the course in his reform-minded program to develop his country as democratic and independant, he has the opportunity to act as a stabilizer to an out-of-control world.

With this view in mind, I can’t help recall a few long-ago poems about my own hopes and experiences of and in Ukraine, my father’s birthplace and ancestral homeland--his "Rodina".

Good friend Ralph Stevens has gone. At age 88, he was unable to recover from severe injuries after a freak auto accident last October. I will miss him dearly, especially his fine, open mind and our stimulating far-out conversations!

I am boundlessly grateful that Ralph, as a LANL retired nuclear physicist, allowed me (perhaps with tongue in cheek!) to add his name to my uncertainty corollary to Heisenberg's classic uncertainty principle that revolutionized physics in 1925. Here are those equations that occupied many intense, far-ranging conversations and application possibilities.

Origin of equation 2.
4 Dec 19. Recalling the origin of my original equation (without Ralph's subscript i), which popped into my mind in late October 1965 in response to a question that the late screen actor Eddie Albert asked me during breakfast on the backyard deck of his home in southern California. Albert and I had met the year before at Duke University in Professor JB Rhine's parapsychology laboratory, during which Albert had given me his card and asked me to call sometime. [See: http://orthodoxodyssey.blogspot.com/1974/11/j-b-rhines-invitation-to-join-frnm.html] This California meeting was a follow up on that invitation. While enjoying the beauty of the morning on his backyard deck and garden, Albert casually asked me to explain why one side of his garden was so alive and beautiful with lush flowers and bushes, while the on the other side the plants were ugly and grotesque, even though his professional gardeners treated both sides equally. He then explained that every morning for months (if not years) he would pray, bless and love the blossoming side, then turn to the other side to rage and curse everything growing there. When my equation spontaneously came to mind in response, he immediately understood, smiled, and simply said "thank you!"  As I left his home on my way north, he shouted after me "LIVE!"

Some years later (2009), while reading physicist/psychologist friend Arnold Mindell's magnum opus Quantum Mind; the Edge between physics and psychology, I came across his description of how difficult it was for him at times to explain certain experiences to his students. On September 4, 2009, I sent him a note with my equation, to which he immediately responded:

Needless to say, I was delighted!
Posted by Eugene at 1:24 PM No comments: